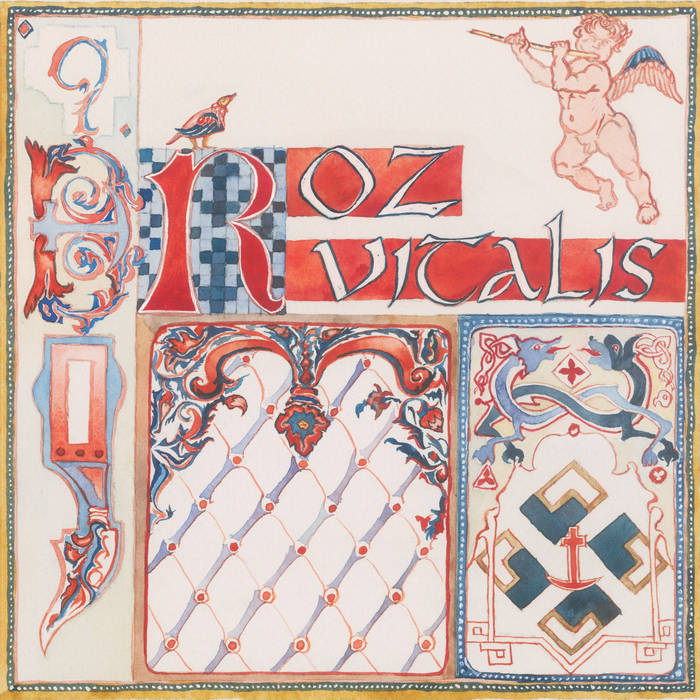 "The more I played this the more I felt that we were listening to music that had a great depth not only in the styles that were being portrayed but also in the amount of atmosphere that was being created. At some times I felt it was reminiscent of Gentle Giant, others Gryphon, Anekdoten and even Cardiacs or Mike Oldfield!"

"Patience of Hope" Roz Vitalis 2012 project is so uniquely diverse but always focused, that each passage no matter how small or important, beholds an unobtrusive creativity that everything blends into place. Weaving different rooting but never ceasing to sound original, the constructions or songs, contain in themselves different moods, never setting on one in particular, which more than being the usual kind of RiO´s pre-planned sudden and disturbing interruptions, Roz Vitalis bets on the eventual transformation and movemernt of styles within each single song.

Perfectly song written designed, all sounds flow in a constant an ever changing combination of styles' atmospheres. The intrumentation ranges from clavecin like baroque figures to the poignant use of the electrics, both bass and guitar. From classic piano moments to frantic but friendly Jazz up-beat and off beat environments. From dark symphonic passages to strongly percussive lands, that in all truth, I can bet, any King Crimson early fan will feel at home again with, but in an alternate reality one of course! (Please do not mistake reference for imitation! Also no vocalist on this effort)

"This album is just filled with beautiful melodies that weave around each other creating a pleasant progressive tapestry of sound. While the keyboard hooks are the main element on many ROZ VITALIS albums that i've heard this one has a much more eclectic mix of sounds. On board is the usual rock instrumentation of guitars, keyboards, bass and drums however there is an army of guest musicians and instruments on board. On PATIENCE OF HOPE we get cellos, clarinets, bassoon, trumpet, flugelhorn, sax, flutes, harp, metallophone, accordion and sounds from one of the oldest Russian instruments known, the gusli which is a multi-stringed plucked instrument derived from the ancient lyre.

With all these sounds on board you would think there to be too many chefs in the kitchen and that it would all collapse by the sheer weight of the players but all these sounds are scattered randomly throughout the album. The focus of a main melody takes flight from usually one or two of the aforementioned instruments and other instruments slowly weave into the sound providing harmony, counterpoint and symphonic effects. The composition style is still very firmly rooted in Western Classical tradition but the style often points more to symphonic prog, progressive folk of the Slavic traditions and avant-prog with the odd timings and Rock In Oppisition elements that pop in from time to time. There are also jazz-fusion interludes adding even more complexity at times. All tracks are logical and free flowing providing atmosphere with subtle technical workouts being common place but never the focal point.

... This band is one of those under-the-radar bands for me that has unfurled its magic and now i've fully caught the bug. Great stuff. Highly recommended."

"Russian ensemble ROZ VITALIS started out as the creative vehicle of Ivan Rozmainsky back in 2001, and have since then established themselves as a productive live and studio project actively exploring music of the kind that exists outside of common genre conventions and expectations. "Patience of Hope" is their seventh full length studio production, and was released by MALS Records in the late fall of 2012.

Roz Vitalis appears to be a vital and creative unit these days. "Patience of Hope" is one of those albums that will leave genre nerds scratching their heads in frustration while aficionados of artists that opt to follow the philosophy of "the only rule is that there is no rule" will find plenty to enjoy. Especially those among them fond of rock music that uses, utilizes and incorporates elements from classical and folk music in arrangements and movements unexpected and unpredictable. A highly recommended album. "

"Roz Vitalis is made up of Vladimir Efimov, on electric guitars and keyboards; Yury Khomonenko, on percussion, drums, and accordian; Ruslan Kirillov, on bass guitar; Vladislav Korotkikh, on flutes and Jew's harp; Ivan Rozmainsky, on grand Steinway piano, harpsichord, Hammond RT-3 organ, other keyboards, and metallophone; Phillip Semenov, on drums; and Vladimir Semenov-Tyan-Shansky, on electric and bass guitars.

Patience of Hope is full of surprises, right from the opening track. The title opens like something straight off Genesis' Foxtrot, only this time with harpsichord and flute. It sounds classical and perfect, until the fast running drums and percussion enter to take a new course. The harpsichord returns with flute and the wonder continues.

"The Unfading Sun" continues the wonder this time with that grand Steinway. Trumpets, flugelhorn, and chimes follow to create an even more profound soundscape. Cellos open "To Stir Up Your Pure Minds", along with clarinet and bassoon. Intricate and delicate music set within a classical mystique. Excellent.

Rather than reveal all the secrets of this album though, I will say that there is a wonderful surprise on every track of this album. Yes, it is all instrumental, but words would only have detracted from the wonder and magical performances within. Yes, you must have the 'Patience of Hope' to appreciate this album. ;^)

This is the best instrumental album I heard from 2012, I only wish I had reviewed it in time to include it within my best of the year.

There is a little music from almost every genre of rock and prog. Classical to even at times jazz.

Get this. Sit back and have the patience to hope and wonder what will come next. Fascinating!"

"Alternatively, call this unusual opus "Unfading Hope". It just so happened that I was fortunate enough to start my reviews of Roz Vitalis with this album, dated 2012. It was a calm and great time to be creative, which was reflected in the recording of the album 'Patience of Hope'. Music full of hope. This is the first "large-scale" release of the ensemble, which has grown to 7 people, not counting the many guest musicians! The collective has grown a lot above itself and "creatively got stronger", which also affected the magnificent album cover created by one of the members of the collective. The album includes such tracks as "Mother of All Rain" which became the band's 'signature song' and a participant in all concerts in the following years. Furthermore, I want to mention 'To Stir up Your Pure Minds', which should be discussed in more detail. In it, the listener has a huge palette of acoustic instruments, from the harpsichord to the violin - beautifully woven into the canvas of the melody. An excellent instrumental for experiencing sublime mental states. And, of course, there is the magnificent 'Touching Upon the Mystery', an electric and progressive blend of this melancholic acoustic opus. It contains the entire palette of musical images and talents, both of each individual performer and the ensemble as a whole. The rest of the songs from the album, as it seemed to me, are excellent instrumental connecting links between the above-mentioned masterpieces. In general, we can conclude that this is not just the creative take-off of the group, but also a huge groundwork for years to come, from which the group will go higher and higher. In the meantime, you should just forget about the bad and drink, like a sip of fresh water, a wonderful musical particle of the gone 2012, as a useful and interesting artifact."

Style of this Roz Vitalis studio album titled "Patience of Hope" can be also described as the "Unclassifiable Branch of Prog Rock"; Avant Prog, Sympho Prog, Instumental are, perhaps, the most relevant tags. The band uses not only "standart equipment" like electric keyboards, guitars, flutes, bass and drums, but also instruments from many guest musicans which play on trumpet, clarinet, cello, saxes, basson and even gusli (which is the oldest Russian multi-string plucked instrument). The leader Roz Vitalis - Ivan Rozmainsky - plays, in particular, on grand Steinway piano and even on harpsichord.
The conception of the album is about the essence and the mysteries of HOPE. In particular, it is about ability to keep in confidence and maintain endurance in the times of troubles. It is possible when human life has been penetrated with the Unfading Sun.

Released by Mals Records in 2012