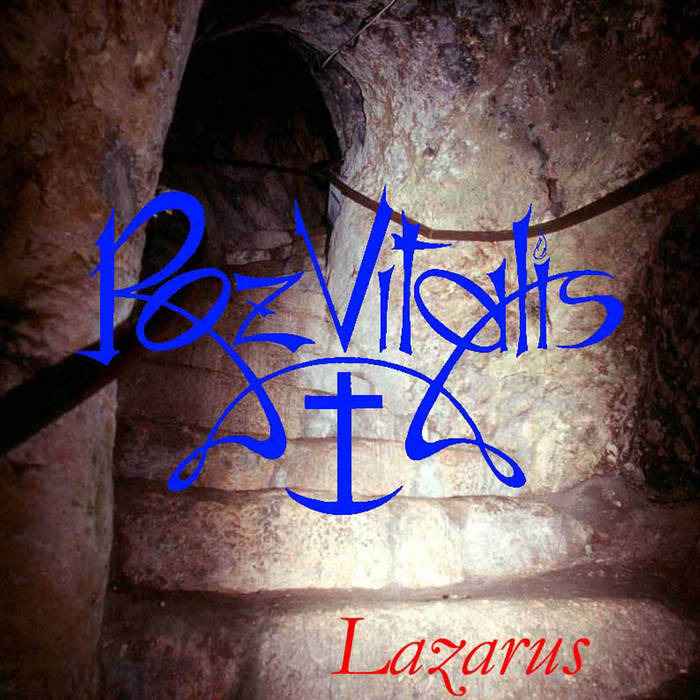 ROZ VITALIS followed up their debut and changed it up a little by unleashing their creativity in full force offering not only moments of pure free jazz inspired improvisation but by also acquiring all types of ethnic influences from around the world. The title of the second album LAZARUS is a name that comes from the New Testament of the Bible about a man who was resurrected from the dead, in fact the only such human known to have been resurrected other than Jesus himself. This idea is very similar to the same ideas found on the Porcupine Tree album "Deadwing" as well as David Bowie's final gift to the world "Black Star," however ROZ VITALIS was ahead of these more popular artists in the creation of a theme based on LAZARUS and throughout this diverse album delivers one of their darkest, most eclectic and experimental albums the band has ever taken on. The results of which will reward the adventurous musical listener but may fly over the heads of those who prefer the more straight forward melodies of the later releases. Personally i love all the phases of this Russian band from St Petersburg and LAZARUS proves how much creativity and elements of surprise can be stuffed into this slightly over hour long extravaganza that mostly contains various keyboard allowances but also has a couple vocal tracks and includes electric guitar. Tracks are so different i'll describe them separately:

"Nepsis (Pulvis Version)" is a frenetic rocker that ushers in jarring energy with slightly dissonant chords with odd time sigs and basically tests the listeners readiness for the tenebrous musical experience ahead. I would call this hard avant-prog with frenetic rhythms, odd time sigs and Univers Zero type energy on steroids. The aggressive heavy organs is soul piercing that immediately brings the early 70s bands ELP and Le Orme to mind and their most energetic offerings. This is symphonic prog done right, with lots of progressive elements and an energy level to put most modern bands to shame. A short but sweet intro to a very odd album.

"Light Of The Ice (Dead Can Rise 1)" slows things down a bit and begins a new pace with a chromatic bell sequence and ambient background synths creating a dark gloomy atmosphere that the album relentlessly continues. It brings a Dead Can Dance feel to mind with repetitive chimed echoing keyboard notes that give a sonar type feel as if we're on a submarine ride in the deep dark oceanic trenches. The drone background synth sets up a depressive and melancholic atmosphere. The track clocks in at 10:39 and is the second longest on the album. This track takes the listener on a journey. A dark contemplative one that incorporates drone key notes accompanied by keyboard runs. The melodies are of the usual ROZ VITALIS type being grounded in Western Classical music but heavy in the synth department, free impov and progressive electronic mood building constructive elements. It also has bursts of energetic frenzies that overlay the slower parts creating a dualistic nature. This track also has beautiful classical piano passages with percussive chimes keeping the rhythm. Very beautiful and original music going on here and one of my favorite tracks.

"Sakura in Bloom" is the most intuitive free improv track on the album. Although that term improv can scare off many, there is an underlying melody here as a gifted classical musician such as Ivan Rozmainsky can never totally turn off the melodic button in his brain. This has a weird stilted melody that has very strange time sigs, symphonic background and periods of low activity. The aspect that seems most improv is the time sigs. Very random but somehow if you are a well seasoned prog musician enjoying extreme complexities you will love this. Has a rather Asian feel to it actually. Reminds me of some of the classical Chinese music from centuries of yore.

"Transspace Express" is yet another wild weird space cadet journey into transcendental ethereal meanderings. While registering heavily in the treble sound range with many types of keyboard riffs overlapping and creating a very space alien type of melody that could be the perfect call-and-response for the aliens in "Close Encounters Of The Third Kind," the weirdness ebbs and flows and has bouts of strange "Saucerful Of Secrets" moments and straight on church organ meets prog folk such as with Gryphon. The seductive creeping synth riffs are quite pacifying and i love how the building blocks of sound superimpose upon one another to slowly ratchet the listener into higher platforms of listening pleasure. It builds up to some heaviness that actually enters rock territory despite this not being a rock album for the majority of its run.

"Thomas's Doubts And Assurance (Dead Can Rise 2)" is a continuation of the theme from track 2 that starts off synth heavy building up electric atmospheres with different sounds on different time sigs that march independently from one another but somehow unite in a complex calculus inspired manner creating a bizarre mixing of timbres, rhythms, percussive oddnesses and mood building effects. Taking track 2 a few notches higher to super-complexities.

"Dream Cave" takes us on an ethnic ride. It starts out with a female vocal chant and then turns into a synth and chime melody.

"Leopard Hunt" is a strange track that combines passages of extreme slow-tempoed ethereal trippiness with energetic ELP keyboard outbursts that work alone and together at times. The bizarre processed female vocals and tribal drum sections with the classical Chopin inspired keyboard runs are truly magical.  "Becoming The Poor-In-Spirit (Dead Can Rise 3)" continues the "Dead Can Rise" trippiness of the first two parts. At 22:11 this track engulfs practically a third of the entire album. It starts out with overlaying synth parts with one that seems to be "talking" from another realm. This is one of the most Rock In Opposition tracks that feels as alienating as a Univers Zero album. Nadezhda Regentova is shouting some strange lyrics towards the beginning that sounds like a mantra in some strange tongue. The time sigs, musical timbres and effects are very eerie and build a jarring dynamic that ratchets the track slowly into ever more strangeness. As you can imagine a lengthy track like this has plenty of time to breathe and develop most nonchalantly. It has a huge mid-section of tribal drumming with some sort of chant with different subordinate keyboard contributions. This one is truly a slow burner but that doesn't make it bad. It is perfect for what it is. The fact that this track is ridiculously long doesn't make it any better than the others, it simply means that it has time to breathe and unfold in a way that is conducive to the desired outcome. It is for the most part non-percussive, keyboard rich, time sig diverse and contains lots of passages that meander for a while and then they transmogrify into something completely different. As with the rest of the album the only true weakness is the use of drum machines but the melodies, prog developments and spirit is top notch. Another ridiculously brilliant track that haunts the listener with diverse elements.

This album is highly recommended for those who love extreme progressive electronic, RIO and avant-prog. Although this has instantly lovable melodies that are pleasing all laid out in a classical music style, the juxtaposition of all of the elements supplicates a dream state where things are all slightly off albeit somewhat familiar. There is never anything totally jarring and the goal is for things to flow in and out of sync in a logical manner so that the listener can grasp onto the larger musical feel. I have to say that this is a very brilliant album that takes me on a most unexpected journey. The musical developments are as brilliant as the classical masters and it's apparent that many masters such as Rachmaninoff, Stravinsky, Shostakovich, Tchaikovksky and the myriad other classical composers have the most impact here but so do the masters of prog rock and free jazz. This album hits me on a level very few do. This album consists of outstanding compositions however the weakness is that it feels very under-produced (for example the drum machines should be converted into a more elaborate drum section) and ultimately comes off as a rough draft of something that should have become much greater. However, i'm still quite happy to hear this album even if it hasn't reached the magnanimity that it deserves. Bravo! "